There have been two constants since the snow started on Thursday…snow has been accumulating, and the chickens have hated every minute of it! I have wondered about the “intelligence” of my birds, because often times in cold rain, hail, and really cold wind they have been outside running around going from tree to tree, and complaining the whole time. They don’t seem to have any sense sometimes, and even in those conditions will wait until almost dark to run inside their house for the night. Even in this storm, on Thursday when it started spittin’ snow, I had to chase them inside and close the door behind them. Friday, however, it seemed something finally “clicked” with the flock and they have kept themselves inside and within their outdoor cabana since.

One great thing about cold weather….cracked corn treats in the food dish, and a heated water bowl!! 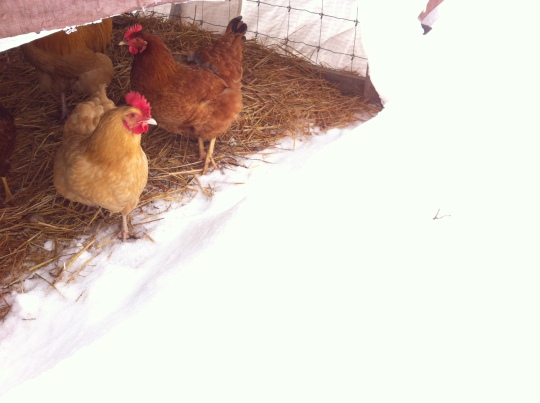 Whooooaaa, I’m not going out ther!!!

Hey what’s that?? A little spinach hung from the ceiling helps break the cabin fever!

The younger flock are still in their larger brooder so they didn’t have the decision making dilemma that the older birds had. Since they were on shavings over concrete, in preparation of the storm we slipped a rubber stall mat on top of the floor and covered that with the shavings. With two heat lamps, they have been staying toasty warm, when they want to warm up…they do huddle together under the lamps during the coldest parts of the day, but they seem to be doing great. I do feel like they are just about ready to join the older flock, but the weather is not ready for them. These active little ladies (hoping for no roosters…) seem to be a little bored lately, so I gave them something to do…just like the big kids.

A little fun, a little spinach, and chicken littles!!

Beyond the chickens…I have some outrageously beautiful pictures of the snow, which turned to freezing rain and left a 1/4 inch layer of ice blanketing the snow on the frozen land of which I and my family are so blessed to share with the Oregon wildlife. 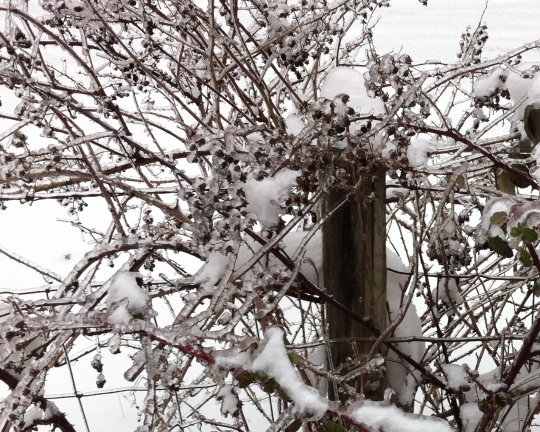 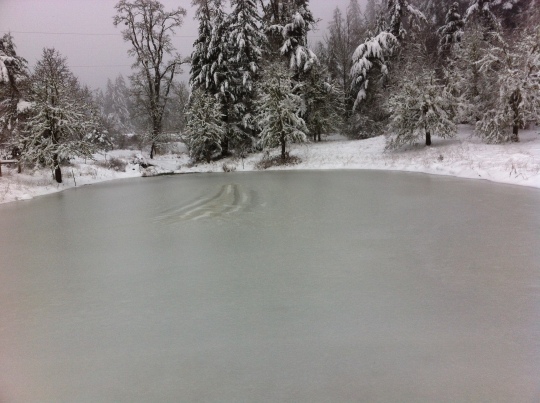 Two ducks tried to land on the pond, but it was frozen. :o(

Limbs full of snow and ice on a Douglas Fir tree, beautiful, dangerous, and amazing!!

Douglas Fir trees being weighed down by the ice.

We Thawed, They Moved