The Bully, The Rooster…. Meet Merlot

It is totally obvious that the boys, Benedict and Merlot, have definitely, and loudly hit their “roosterhood!!” They are both very handsome, young studs with a definitive following. Benedict has his three ladies: Don Pedro, Don John, and the beautiful Claudio. Merlot has four ladies that follow his every command: Riesling, Chardonnay, Champagne, and Sangria. They are both ever present Sultan’s with a separate, devoted harem. Everyone, generally, lives peacefully with one another. The hens co-mingle and get along quite nicely. The roosters seem to be tolerant of each other, and in the human world, would probably even kick back once in awhile at a BBQ or at the beach…. that is until this past week.

Something has changed in the “mind” of young Merlot. When that rooster stepped out of the chicken house on Wednesday morning, things were different. It was as if he looked around and said, “this kingdom is mine…it is all mine!!” He started wrangling the girls into a corner of their outside yard. Benedict’s harem were caught a little off guard and seemed confused…rapidly clucking, they followed Merlot’s direction, except Claudio. Claudio ran the opposite direction. She has never been amused with Merlot’s antics, and has chased him around the yard many times (Caludio is 2.5 weeks older.) This, apparently, did not sit well with young Merlot…his new demeanor was not accomodating, and he was determined to let everyone know. 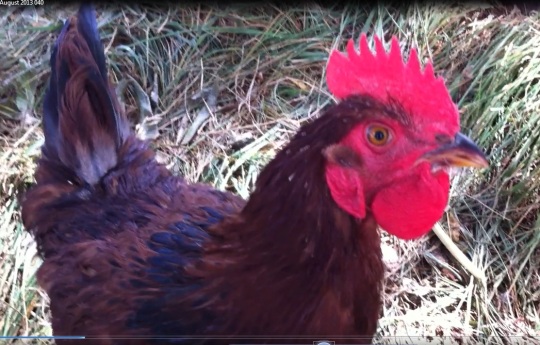 Watch out Benedict…I’m ranglin’ for your hens .. especially that beautiful Claudio!!

Later in the day, it was very apparent that Merlot was not only trying to win the affections of the flock, he was demanding it. It was like a switch came on overnight; he had become a mean, bully boy. Although Merlot was chasing and pecking any of the ladies who fell out of line, he was pursuing Claudio at a different level. He would dig deep into her back or above her tail with his beak, pulling out feathers while she desperately ran away squawking loudly. She had become afraid of Merlot, and by afternoon, was isolating herself from the rest of the flock. If he saw her trying to eat or drink, he would chase her away.

(Since this IS my first rodeo raising chickens (both hens and roosters) I’d be totally appreciative if you could tell me if this is normal rooster behavior, or is Merlot an aggressive rooster. I don’t want my girls stressed out. He also has taken to biting people. Thank you for your advice in advance!)

While all of this was going on, Benedict just stood around looking like a deer in the headlights. Normally, this Buff Orpington gave Merlot a very small allowance; there was not much that he would tolerate from the smaller Rhode Island Red. Was Merlot taking over the throne? While they are both Sultan’s…Benedict has been the real King over this chicken coop. I was hoping that he was going to step up and put Merlot in his place. Benedict is, normally, kinder to the hens than Merlot tends to be.

As Friday rolled around, something was happening within the flock. The older girls (the Shakespeareans, AKA The Untouchables [see earlier posts]) started standing up to Merlot. Benedict had had enough of Merlot chasing around his girl, Claudio, and was standing up for her….chasing Merlot whenever he came close. Also at this time, Benedict found his voice. His crowing became louder and more forceful…he was not going to let Merlot rule his kingdom…neither were the girls!

As the weekend has progressed, there is calm in the kingdom. The two sultans are with their proper harems, and Merlot has been moved back into place where he originally resided within the pecking order. It’s a good thing too…because given the choice of having to eliminate a bully rooster from the flock, and/or reduce one sultan to bring peace back to the hens…wellllllll…there’s a reason why Benedict is one of the “Untouchables.” I truly hope Merlot understands that………. 😉