It was like any other morning. The air was cool and filled with the melodic symphony of the many different song birds that make their home in the forest. The resident bullfrogs croaked their low drone-like percussion, and the neighboring peacock rang out like the clash of a cymbal, carefully placed within the orchestra. Benedict, our resident rooster, added the occasional trumpet-like excitement as the song continued. There is just no better performance to be heard than this early morning ensemble.

The flock was happy that morning, the air was cool, but the sun was shining. The hope for the day was warmth to bask in…add a comfortable dust bath, and their day would be awesome! I opened the door, and the flock filed out in line. After cleaning up around around the nesting boxes, and taking a quick look, I left my feathered friends to do their early morning dance as the symphony played on. 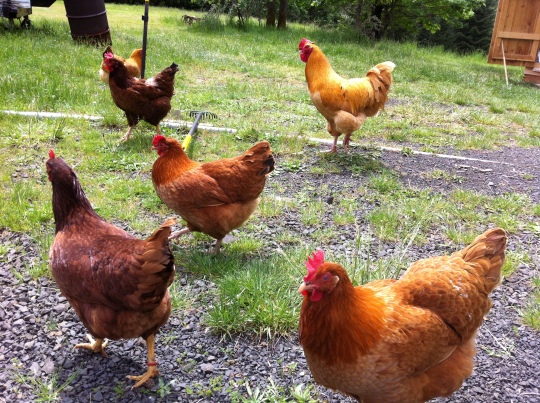 The flock during a calmer day.

About 20 minutes later, the melody changed. Rather than the calm, continuous song, the tension had risen. Benedict’s trumpet had become urgent, and the hens were now chiming in loudly. The dogs, who were inside the house, ran to the windows barking excitedly. Opening the door, the sound was deafening. I ran out to see what was going on.

As I approached…there it was!! It had already turned to start its retreat. It was close to the house…right up on the chicken house. It was a coyote!! It casually trotted away. I ran out to the flock…yelling and raising my arms towards the retreating coyote…it picked up its pace and ran down the hill toward the creek, and out of site. Everyone was accounted for…and I didn’t see any sign of pulled feathers. Thankfully, I hadn’t let the “Littles” out of their area at that point,

so they were still safe in the house. The flock had dodged another bullet!