It has been raining a lot the past few days. In fact, we have measured 3.64″ in the last two days. Since the conditions were very similar to the day I met our resident monster salamander (see Alien Invasion) I went to check on my elusive friend. Quite a few days had passed from the time I last saw her…but actually, let me back track a moment.

A couple of days after my initial “first contact” with the alien invader, I ventured back to her little hide-out. We had a couple of days of dryer weather, and I wondered if she was okay. She was laying in the hole, looking kind of dead actually. I decided to try a little water, so with bucket and water in hand, I poured it down the sides of the hole so that it wouldn’t be a direct hit on top of her. She moved!! Being really excited now, it seemed that a little more water would be a better idea. My next move was to try and think like a salamander…hhhhmmm…I think I’d like to have an earthworm or two. There was a shovel, and there was a patch of very moist soil…worms!! 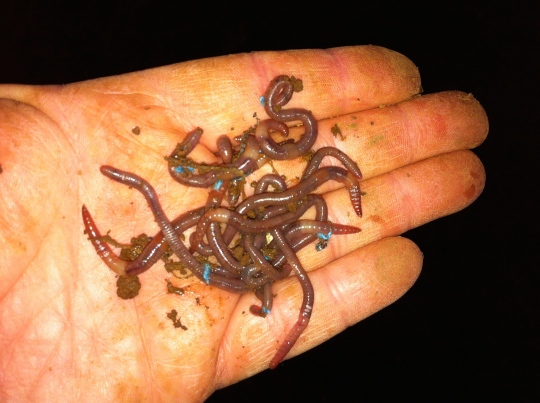 Yeah, kind of gross, but it will feed the salamander. The flecks of blue are lint from my pocket.

There was a surprise at the bottom of that salamander hole, of which, I couldn’t see until I looked at the picture…. Can you see it?? Hint: In case you don’t remember, that original salamander alien encounter was with a very large, black, slimy critter… 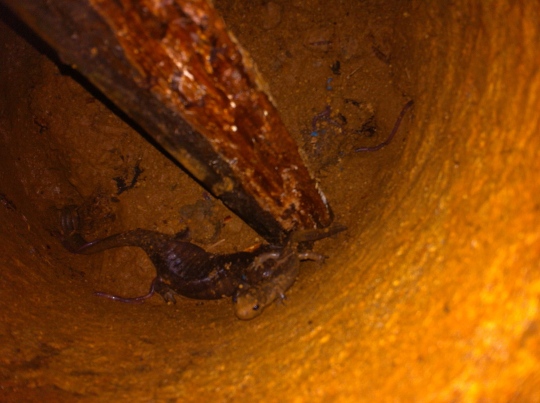 A hidden item in this photo.

You found it!!! All of a sudden there were two amphibians at the bottom of that hole!! After a couple of days, the duo disappeared slowly into the access hole at the bottom of the deep hole. Well, the last couple of days of heavy rain did fill the hole back up with water until this afternoon during a break in the rain, it was slowly absorbed. Okay…bring us to about 5:15 p.m. today…..all that I can say is there is something very strange going on at the bottom of that post hole. I don’t know what’s going on!! You need to click on the picture, and then zoom it up to get the full effect. 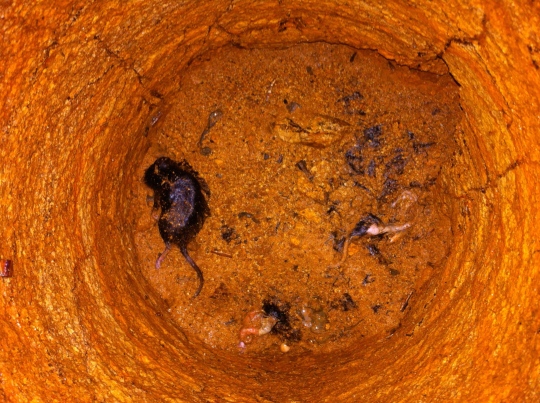 That’s no salamander…that’s a rat!

Yes, that’s a rat…the other stuff lying around it….is anybody’s guess. In fact, what do you think it is? Did the rat eat the salamander?? Gross!!