My hens have been talking to me, very clearly. I can hear them, and their requests have not fallen on deaf ears. Okay, before you call a crisis worker, let me explain…. 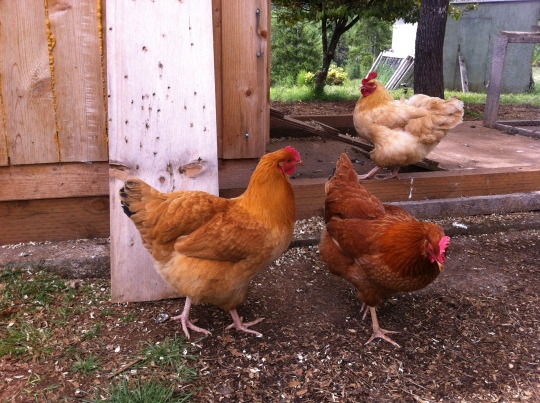 …chickens have a way of looking at you, an impassioned blinking of their eyes, and a subtle, sweet, higher pitched cooing of sorts that lets you know they have something to say. If you listen, really listen with your eyes, ears, and your heart you can start to understand what they are saying. My chickens were telling me that their home was no longer inviting. Given the addition of the, now-laying four Middles, to the, already six laying Originals,…and four near-future-laying-hens better known as the Littles, three nesting boxes were no longer adequate. The ladies were complaining.

First of all…can you imagine having to wait your turn while needing to lay an egg? I don’t think it’s too comfortable…and neither did they. We had A LOT of complaining going on and rightly so! I drew up the plans, and the remodeling began!

Tony removed the inner wall, which included the nesting boxes, that separated the people area from the chicken area, opening up the entire house…

My idea was to create a tiered nesting box area on the left side, back wall. The bottom level would jut out creating a ladder of sorts for easier access. The top level boxes would sit flush against the wall. My hope in this also was to create a poop protected area underneath the nesting box area for those who might want to snuggle into clean(er) shavings to take a dust bath or just take a nap. I have found that not everyone wants to roost at night, some prefer to nestle in. So, Tony and I…Tony…built three more nesting boxes, and in they went! 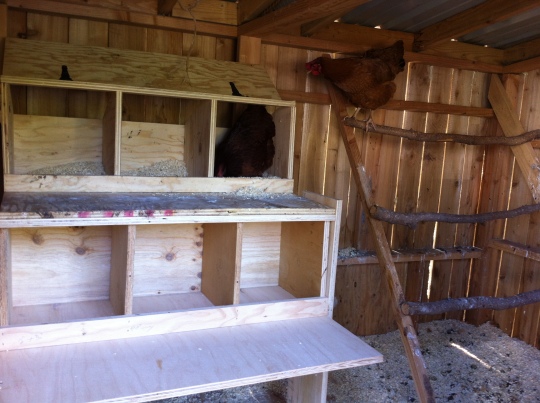 We had a constant companion helping with the process….

….she supervised the entire project. Even though she didn’t like the sound of the drill, and complained her way through it…she wouldn’t leave..hahahaha!

After the nesting box area was finished, we started on the rousts. We decided to change out the Douglas Fir limbs to wooden planks. I believe they are happier not having to balance all night, and are resting better. I don’t hear the early morning (like 3:00 in the morning) carrying on anymore…now it starts about 5:30. I think we are all happier!! 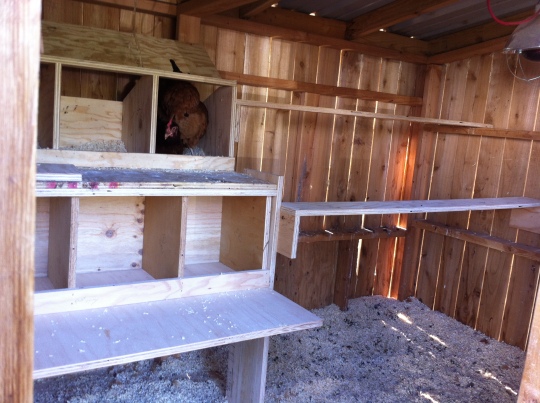 And here’s the result…..

The first night after the remodel.

…yes, those are the Littles, now totally integrated within the flock. They are finding their place in the pecking order, and are starting to roost on the boards with the older birds. Harmony in the merge?? Not quite yet achieved…but they are working it out! As for the success of the additional nesting boxes…A LOT less loud complaining from the hens…and MAMA CHARDONNAY IS BACK ON THE NEST!!!!!

Nooooooo!!!! Really NO!!! I replaced the eggs she accumulated…. TEN!!! ….with wooden eggs. She is still nesting and protecting her false clutch as she normally would, and I’m supporting her efforts with extra food, goodies, and water. I’m hoping she will abandon the nest at the point where they should hatch but don’t. She is so adamant on the nest, I didn’t have the heart to take her eggs away and push her off the nest…I hope this will be easier for her. She looks at me, and blinks slowly as she tells me she loves her little brood beneath her. She’s a great Mama…thanks to this big guy…

Benedict….our Big Daddy Rooster!! Patriarch to the Middles, and the Littles (aka the Muppets.)

In that vain……our family would like to say…HAPPY FATHER’S DAY!!…to any dads who may be visiting the farm today!! We hope you have an awesome day, week, month, and year!! Take care all!!

Fir Chips in the Garden

An Enemy Among Us