When does life begin??…the age-old question. I believe that life begins at conception, for many reasons…and I believe the Bible tells us this. So what does that mean for chicken eggs? Given the right heat and humidity, a fertilized egg develops into a chick…but, put them in the fridge, they look and act like any other egg. Seems to me it is safe to believe that in a fertilized chicken egg, once it starts developing, life has begun. Little Austin Healey is the strongest example of this…EVER!!! She fought to stay alive in her shell during extreme single digit cold temperatures…Chardonnay was on and off the nest in the beginning because she kept getting confused which nest was hers. She warmed, she cooled, she warmed, she cooled, she was late in hatching, and when she finally did hatch……..

Very soon after her hatching, it became apparent that there was something different…wrong with little Austin Healey. Trying as hard as she could, she was not even close to being able to stand….she crawled on her belly, and her legs splayed out to the sides. She was so determined, she never gave up…so neither would I. I promised Austin that I wouldn’t give up on her. As I watched her, it seemed that she had hatched prematurely even though she had been in nest for over 21 days…is that even possible…is it possible for a chick to start and completely hatch from an egg prematurely, on her own?? I am convinced that it is. Here’s Austin’s story since the hatch….

Austin’s legs had no tone, her feet looked almost as if the bones had not finished developing. They would curl into a “fist” whenever she tried to use them. She was so less developed than the chick, Honda, who had hatched just 29 hours before her. The pictures really show the extreme differences between these two.

Honda standing, Austin could not stand.

20 hours after hatch…Austin is having a tough time.

Obviously, Austin needed to be given a chance to develop and grow stronger, so she was separated from the young flock. Since there was such a big gap between these last two chicks and the others, I took Honda out of the brood (she was getting kicked around a bit) she and Austin became roommates. They had each other to cuddle for warmth, and I believe that Honda was a great example for Austin to follow as she struggled to stand.

Austin fought hard. She crawled on her belly, I removed the pine shavings from her little brooder and replaced it with a rubber matted rug for traction. I fed her sugar water until she could start eating chicken starter mush. Her legs continued to splay to the sides…I found this idea about tethering her legs together with vet wrap… http://www.the-chicken-chick.com/2012/02/spraddle-leg-in-baby-chicks-what-is-it.html So, I tethered her legs… 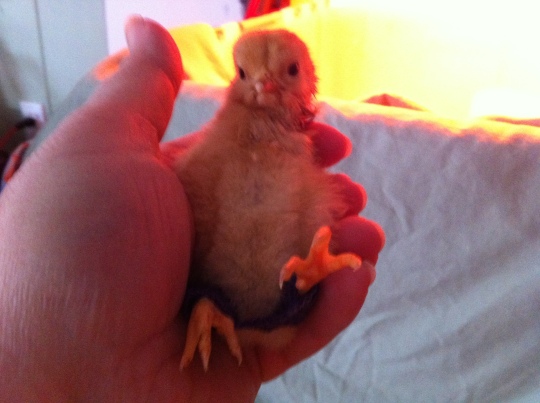 Hoping to strengthen her legs and hips.

I so hope this works!

There is so much that I could say about our little Austin Healey. She is and was such a fighter. She tried and wanted to stand so badly. We worked together…every time I held her up to eat, I positioned her feet and body correctly so that she was upright, and uncurled. Everyday, Austin got just a little bit stronger. Honda moved back into the main brooder leaving Austin a little lonely…so we gave her a friend.. 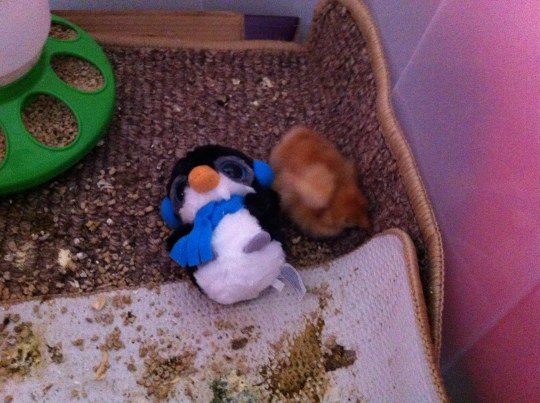 Not quite the same as having Honda around, but better than being alone.

Austin worked hard on her physical therapy, holding her body up, with my support, working the muscles in her legs. Then one day, her legs stayed forward, underneath her…the next day she was moving around in a squatting position…the next day she wobbly, wobbly stood mostly straight…the next day, she stood up and walked upright….the next day she gained strength and coordination…the next day, she met her mama, Chardonnay, for the first time. She spent the day, she spent the night…she survived both. She eats and drinks with the brood, she cuddles under the heat lamp with her family, and hides under her mama’s wings. She is a fighter…she is AWESOME….she is home!!